in transmission (laziness) and a short break in Sydney explain my absence from blogging.
I find it awfully dispiriting and engendering of a nasty shade of green around my gills when I open up a blog to be confronted with "the reason I haven't been blogging is..." and  it goes on to describe their journey from the base camp at Everest to the summit or a fabulous holiday in some previously unspoiled corner of the earth (until they arrived with a hoard of other tourists). Well dear folks, I too have been on a fabulous short break! Two glorious days in Sydney sharing a hotel with our overseas based son and taking in the best of dining and sightseeing Sydney offers.
Our hotel was the fabulous Park Hyatt which is situated almost underneath the Sydney Harbour Bridge and which gives fabulous views of the harbour and the Opera House across the water.
Australia day on the harbour was wonderful and the crowds of people were well behaved and enjoying the sunshine. We hopped on a ferryboat and for the princely sum of $2.50 each (Seniors discount, the only consolation for growing old) were in the thick of the activity, tall ships, ferryboat races and the enormous flotilla out that day. 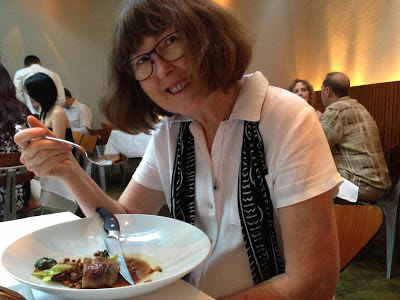 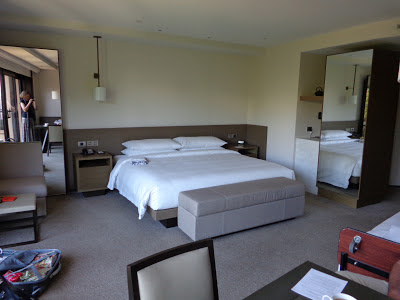 Our room at the Park Hyatt (can you tell I was impressed? that is the biggest bed I have ever seen!) 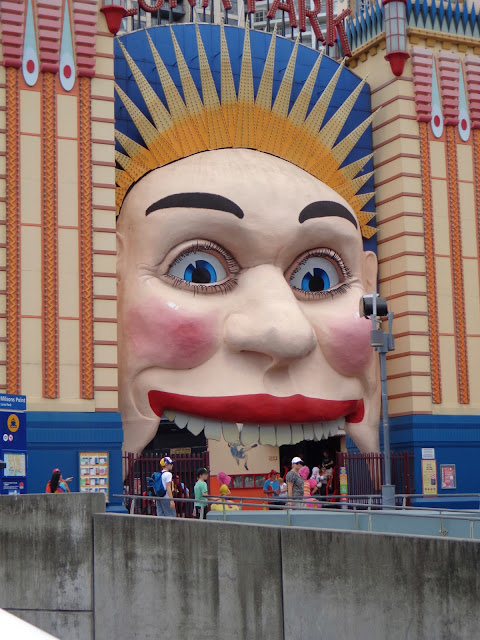 How I felt about my holiday (the entrance to Luna Park). 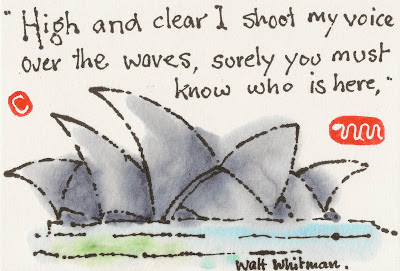 A sentimental response to seeing my old "stamping ground". An etegami of the Opera House.


The high point of the trip was eating at the three hatted Rockpool restaurant, truly beautifully presented  memorable food but being nouvelle cuisine it did leave us space in our tummies for a sneaky ice cream on the way back to the hotel. Yum Cha lunch on Saturday was a world away from the quiet ambience of the Rockpool but we gorged ourselves on chicken's feet and wonton, to some ill effect I must confess but it was simply lovely going down!
The rains have come since we returned home and our thoughts turn to the disastrous flood we suffered in 2007 so we are wishing hard that the rain eases and we can relax again, life is back to nearly normal!
Posted by origa-me at 6:31 PM 8 comments:

Ode to a peach.

Well not an ode really, more of a glutton's rant. Of all the peaches that I have eaten in my long life my favourite kind is the white fleshed peach.
Once upon a time in the dark old days it was rare to eat a peach that hadn't been home grown, living as we did in the far arid reaches of the state. To compare a store bought, gassed, stored, transported and probably predigested peach with the glorious ones of memory is to compare a "like" with a passion.
BUT, yesterday the impossible happened, a peach (a white fleshed peach moreover) in all of it's peachy perfection landed in my shopping trolley and more than lived up to my (usually disappointed) expectations.
I brought that beauty home, meaning to paint it before I ate it and this sad etegami is the proof of what happened next. 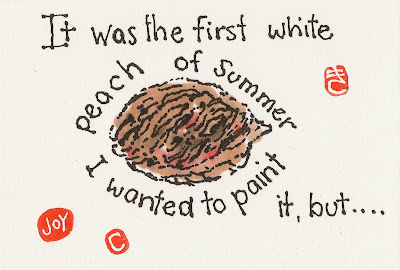 Well, having survived the Christmas/New Year celebrations and the heat wave conditions we are experiencing I decided it was time to burst onto the blogging scene once again.
Life is a bit of a struggle at the moment, drinking lots of water to keep my lousy lungs hydrated.  I used to love summer but find it increasingly difficult to stay well in the heat and humidity.
I have been doing a few constructive things while confined to the cool of the aircon, weeding out cupboards, removing a few of the cobwebs and relocating the spiders that love our high ceilings where they are safely out of reach of my regular but cursory cleaning attempts. I did remember this very relevant Haiku by Issa while I was wielding the broom and apologizing to the spiders, reminding them that they had a had a good run or "a fair suck of the sauce bottle" as we usually say! 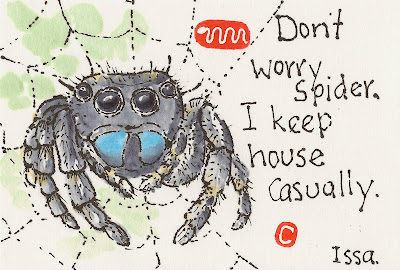 Another (the last I promise) Year of the Snake etegami. 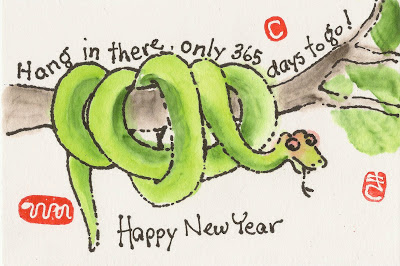 Lastly an etegami to thank a neighbour for the wonderful chilli peppers she gave me. 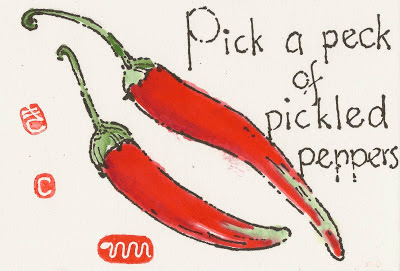